The Kinema In The Woods (Woodhall Spa)

Kinema In The Woods 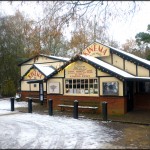 Traditional British Cinema, at Woodhall Spa in the middle of Lincolnshire. The Kinema is unique in many ways. It’s a traditional British cinema from the elaborate foyer, through to the rear projection screen in the main auditorium that features a Compton cinema organ that rises in front of the screen, and is regularly played during […]